Taken from the 'Castle Cary Rugby Club Centenary Booklet'
© CCRFC 1988.
In this section:

Castle Cary Rugby Union Football Club was established in October, 1888. Its headquarters was the George Hotel. The President was John Stephens Donne (pictured), a prosperous flax-spinner in the town; Frank Criddle was Secretary, Treasurer and captain.

The first match was played on 1st December 1888 on a large field belonging to farmers John and William Clothier at Ansford — a neighbouring hamlet. The visiting team was Shepton Mallet: the match was drawn, the scores being a dropped goal to three tries ("one disputed", recorded a Caryite, but J.S. Donne was the referee). Scoring was somewhat different in the 19th century!

A crowd of sixty or so turned out to watch the first game: an indication that the Castle Cary Club would soon become an institution in the town and surrounding area.

In that first season Cary played nine matches, winning one and drawing two of them. After a particularly heavy defeat by Yeovil — 6 goals and 6 tries to nil — Cary's John Mackie wrote in his match report: "The Cary team, having studied the rules and practised frequently, will prove formidable opponents some day."

For the 1889–90 season, local insurance agent Arthur Harrold was appointed Secretary and solicitor John Oliver Cash was elected captain. The latter was a fine athlete and brave player: he would serve the Club for many years. It was around this time that CCRFC picked up a nickname: the Chickens!

By 1893, the ratio of matches won to those lost had improved steadily — as had the amount of spectators per game. In February of that year, the editor of the Wincanton, Castle Cary & Bruton Monthly Review was moved to write 'The Club is very popular and large numbers visit the ground on Saturday afternoons to witness the matches.'

The 1894–95 season will always occupy a prominent position in the Club's history. Eight matches won, five drawn and only one defeat — with only three tries against, throughout the entire season.

The late 1890s and early 1900s saw the team, more often than not, putting in a respectful performance on match days. In September 1911, gate money of 3d was requested for the first time, along with contributions from players and linesmen. It was now thought necessary to employ a policeman at all home matches to control an unruly crowd.

However, the Saturday afternoon revelry was cut short in December 1914: the Great War had intervened and the Club was disbanded. 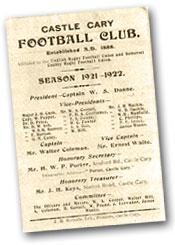 Although the First World War concluded in 1918, it was not until 28th February 1921 that a meeting took place to discuss the resurrection of CCRFC. After some dispute over a choice of ground, captain W.S. Donne's brother, T.S. Donne, offered his land to the Club, and the proposal was accepted.

The Club was now back in business: in October of that year Castle Cary Town Band received a standing invitation to play at all home matches. (There was no entry fee for band members.)

Scandal came to the Club during the 1923–24 season. The Treasurer, J.H. Keys, was refusing to attend meetings to explain the accounts: an audit showed a deficit of £8–7s, with £3–7s unaccounted for — a significant sum in 1923. Mr Keys was summoned to a meeting to tender his resignation and explain the missing money. He refused and R.W. Mackie was elected Treasurer.

During the season of 1929–30 Castle Cary played a record twenty-six matches, winning thirteen and losing eight, with record gate receipts for the first time covering travelling expenses. However, the depressed 1930s took their toll on the Club. Farm workers were ever more reluctant to lose their small Saturday afternoon wage, teams were hard to raise, and the number of spectators dwindled.

In January 1938, the Club's Jubilee year, the difficulty in raising a team led to the decision to disband for a season. By October it had become apparent that, sadly, this was to be permanent. The Club's assets were put up for sale and fifty years of rugby in Castle Cary came to an end.

In January 1952, Paul Greenough and Peter Trickey convened two meetings to suggest reviving rugby football in Castle Cary. On 1st February they returned to the Club's roots in the George Hotel to elect the first officers of the newly-formed Castle Cary Rugby Football Club. Included in the Club's first accounts was 'balance from the old club' — £6.68 remaining from 1938!

Mr Kynaston's ground opposite West Park was chosen as the playing pitch. This was followed in 1957 by a move to the Memorial Field when the Parish Council agreed shared use between CCRFC, the cricket and soccer clubs. The cost of the extended pavilion was similarly divided; the rugby club intensified its ongoing fund-raising efforts.

By 1966, CCRFC was celebrating one its most successful seasons along with a healthy bank balance — the pavilion debt had been repaid. The skittles weeks, dances, barbecue and dinners continued to keep the Club's finances in the black.

Another decade; another change of ground. In March 1979, building contractors had inadvertantly ruined the pitch on the Memorial Field and the Club's savior was Ditcheat farmer, Ernest Dyke. He leased 8½ acres of land, situated behind the Brook House Inn — the same field that is the home of CCRFC today.

The original Clubhouse was an ex-Houndstone Camp army hut: it was obtained free of charge and had to be transported in sections. It served the Club until 1993 when it was unfortunately destroyed by fire. Its replacement is the familiar concrete structure you see today: it was officially opened on 6th September 1995.

CCRFC achieved total independence in 1988 — the Club's Centenary year — when the Brookhouse Field was purchased outright. During the years since then the Club has gone from strength to strength and is widely regarded as one of the friendliest and best-run in Somerset.